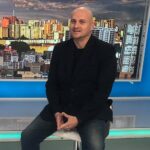 Marius du Toit obtained a B.Juris LLB (Unisa) whilst being employed by the Department of Justice as a Prosecutor and Magistrate.

He further acted as Magistrate in various courts in the North West and Northern Cape Provinces.

He has also spoken on most of the radio stations in South Africa. He has also acted as a guest lecturer at Bond University on the subject of Criminal Law and whilst still in the employment of the Justice Department he trained young prosecutors in the prosecution of various criminal offences.

In 2005 he opened an office in Centurion from where various legal services are now offered.